Who am I? Self Portraits in the Contemporary World
by Vivien Gaston

Do self-portraits show us who the artist really is? The intriguing works of Shane Jones suggest that this is not always the case. In place of emotion-laden self-expression, Jones chooses subtle and complex disclosure. In a work of classical composure he depicts himself in shadow and from the most impersonal of views, the profile. Light beams onto the back of his neck and the stripes of his shirt but not on his face. Cast in darkness, it takes on the scissor-cut angularity of a silhouette. After some time we realise that if Jones’s portraits reveal the artist, they do so in an indirect way. 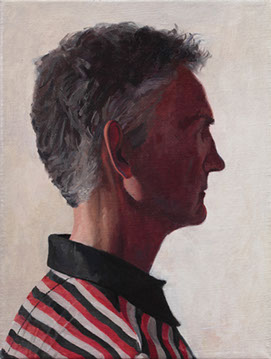 Mirrors, essential to the painter’s self-knowledge, are pivotal to Jones’s strategy. His profile portrait required at least two for the artist to see himself. But usually the mirror is invisible, the means to an end. In Jones’s self-portraits the mirror plays a prominent active role. This is extravagantly apparent in a self-portrait in which the artist peers down into the depths of a Baroque mirror. Competing with the bizarre curves surrounding his face are the straight geometric reflections of the cornices. Jones is de-centred, an interruption amid these complex lines of sight, barely illuminated by light from above, with a less solid presence than the bold frame.

In other works Jones obscures his own features more literally. He suspends a blank white pillowcase in front of his face, while clenched hands and black clothes accentuate his refusal to reveal. Most confounding is his bubble-wrapped self-portrait. With uncanny effect Jones delineates the innocuous circles of plastic, each a microcosm of milky reflective light. In a moment of clarity, Jones’s eye peers through the hole of a burst bubble. The viewer searches for his features but must be content with blurred hints and haze, mocked by the clear handwritten name on the masking tape.

While Jones seeks precise illusionistic effects, he resists slick photographic realism, emphasising instead the transition between the lively material presence of paint and the optical appearance of his subjects. This is apparent in a close-up view in which he covers his eyes and mouth with his hands in a ritualistic gesture. Its vigorous surface recalls the exploratory evocative realism of self-portraits by artists such as the late Romanian-born Israeli Avigdor Arikha and the contemporary London based Tai-Shen Schierenberg.

At times Jones even courts a kind of self-annihilation. With Magrittian dead-pan simplicity he paints a non-face, a blur, a shadow, hovering over the illusory painted canvas, propped up on an equally illusory easel in expectation of delineation. While we recognise the shape of the head, we look compulsively for the face. In another shadow work Jones’ whole body throws its reflection on the ground while, oddly, only his feet intrude into the space with surreal effect.

The same blurred easel image reappears tucked into a board of memorabilia in Jones’ tour de force still-life. Each item contains its own world of meaning referring to aspects of the artist’s life, postcards, music, a feather, letters, bookmark, badges, a whip, a book of magic and a photograph of himself riding a horse, all are delineated in astonishing detail. In the tradition of Dutch still life, the work not only evokes his life through images but also reflects on the processes of art. A postcard of the seventeenth-century Dutch artist Carel Fabritius’s depiction of a goldfinch, 1654, pays homage to one of the icons of illusionistic still-life painting, while another is of James McNeill Whistler’s misty Battersea Bridge, c.1872-5. In a second more austere version, set against a baize green background, Jones combines images of his own work with postcards of portraits by Vermeer and Gwen John, an array of tools and brushes and a starkly simple self-portrait drawing.

Two works depict him drawing. From the Renaissance onwards artists have portrayed themselves with brush or pencil in hand, emphasising their creative talent in an effort to raise the status of artists, previously regarded merely as labouring artisans. Jones’ hands, fully realised in the flesh are set against the monochrome of the pencil drawing of his face in frontal and profile views. In another version he draws his face so that it appears upside down to the viewer. The cropped views and visual tricks of these inventions evoke M.E. Escher’s playful visual games rather than revealing the artist’s inner self. This inscrutability is evident in another silhouette self-portrait framed by a Victorian style oval that overlays another shadowy figure. Which is the more real, the identity fixed into the floating profile or the blurry figure almost dissolved in opalescent brushstrokes beneath?

But Jones also confronts the body as a palpable presence. The history of self-portrait includes a number of memorable full-length naked self-portraits, from Albrecht Durer’s poignant self-depiction when ill to Egon Schiele’s confronting performances. Jones’ version is analytic, with legs apart and arms clenched at his sides, reminiscent of Leonardo’s Vitruvian man in which the arms and legs mark out the circumference of an intersecting perfect circle and square.

One of Jones’ most intriguing works is his painted web-site, the ultimate twenty-first century self-portrait. As a sculptural model the illusion is extended into real space, complete with grey computer case and keyboard. This website self-portrait with its prominent name ‘Shane Jones’ emphasises the artifice of persona, its layers of simulated reality and the shaping of identity through text and branding. In the image he depicts himself intently at work, in rigid profile painting another illusionary canvas. The colourful microcosm of the screen contrasts with the grey computer case. Banal it may be, but it is meticulously painted, astonishing in three-dimensional effect, inviting the viewer to press keys and pads that are in fact mere marks on a flat surface.

Lastly Jones invents a model in which a figure of the artist gazes at an empty frame, hung from the wall. Is he conjuring up what might fill the emptiness? An unmodulated white accentuates the sense of negative space, awaiting the artist’s creative act to bring a world of full colour into being.

In his fascination with manipulating frames and visual tricks Jones’ work belongs to a long history of the genre known as trompe l’oeil (to deceive the eye). Well-known is the tale from ancient Greece of the artist Zeuxis who painted a still life with such convincing grapes that birds flew down to peck at them. Such ploys have continued from the grand optical illusion of the Sistine ceiling to the visual deception of a humble fly painted on a Dutch still life. In particular Jones refers to the seventeenth-century painter, poet and theorist Samuel van Hoogstraten for whom the illusionary depiction of material objects was not only an opportunity for the artist to show off his skills, but was also part of a theatrical interchange with the viewer who moves between feelings of shock, amusement and awe.

For much of the twentieth century the use of illusion in art was regarded as merely a clever charade. Jones’ work is part of a resurgent embrace of illusionism across many media. Through his self-effacing constructions, denying direct access to any essential sense of self, Jones is able to answer the question ‘who am I?’ with far wider resonance than many ego-bound attempts. Jones acknowledges the many philosophies in which it is believed that the self is only known through sources outside the immediate sphere of identity. For Paul Gauguin in his major painting Where do we come from? What are we? Where are we going?,1897, the answers were to be found through the artist’s exploration of myth and exotic cultures. For Jones a more immediate method applies. The figure standing before the empty frame awaits the magic of art, brought about by the confluence of skill, time and personal conviction. These are self-portraits that disclose their creator by bearing witness to that magic.