There's no getting around it, I'm afraid - Shane Jones is a liar! An unashamed and highly accomplished liar. A liar, though, who tells lies that we enjoy, that makes us willing victims who are happy to be duped. A liar who tells lies that are impossible to believe, but uncannily convincing all the same. A liar whose lies spring from a well of sublime skills, generosity and playfulness rather than malice or fraud.

This visual dishonesty can claim a long tradition, and shows no signs of abating. For more than forty years, the Belgian Surrealist Rene Magritte worked on a series of paintings entitled The Treason of Pictures. Perhaps the best known of these is the work entitled Ceci n'est pas une pipe (This is not a pipe) in which a faithfully rendered pipe floats above an inscription of the title. The artist is telling us what is plainly obvious - that we could not actually smoke this painted pipe - it is an image. It presents to us the idea of a pipe. Tellingly, Magritte chooses the word "treason" to describe his deception - a deception he shares, to some degree, with every other representational artist, in any age or culture. 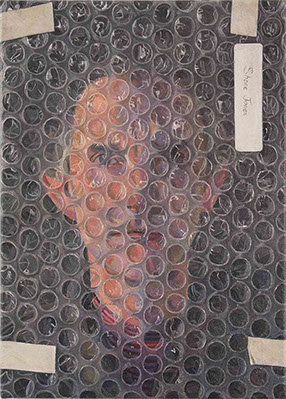 Inevitably, this presents a paradox. The faithful rendering of three dimensional scenarios via a medium that offers only two - in this case, painting - inevitably becomes a deception . . . a deceit . . . a sleight of hand. No matter how honest the depiction, a painting that represents is inevitably a lie. In the song Things Have Changed Bob Dylan gives us the line,

I think he's saying that proof, truth, reality, and all those absolutes are illusions - that we navigate life through metaphors, games and fictions.

The art of trompe l'oeil , through its own confession, is a trick. It seizes upon and manipulates optical assumptions and associations in order to present the impossible, and then has the temerity to invite our admiration for the dexterity of the con. In some ways it can trace relationships with other entertaining deceits - I refer to such vocations as acting, the cinema, fiction-writing and, most particularly, magic - that are not only ubiquitous but fundamental to our relationship with the world around us. Shane Jones is a huge cinema buff and simultaneously enjoys a familiarity with the methods of deceit this medium employs while losing none of the wonderment it engenders. He also enjoys stage magic and holds a deep admiration for its manifestations of the impossible.

The skills that are inherently associated with these treacherous activities elicit our admiration and envy, and many of us devote our lives to the pursuit and mastering of such elegant forms of trickery. But as with all skills, the path to this degree of mastery is littered with - and often obstructed by - the mediocre. A master guitarist can take a humble construction of wood and wire and animate it with an almost supernatural connection with the sublime, while the majority of practitioners can offer only the stale and the predictable. A master magician can nourish our optimism by making the impossible appear possible - a defeat of the rational if you like - while the fumbler will only reaffirm our grudging pessimism. The art of trompe l'oeil, sadly, has been responsible for many banal outcomes. I'm sure most of us have eaten in restaurants where we do our utmost to avoid looking at the murals - a champagne glass on a window sill, a view of Tuscany glimpsed through painted ferns - you all know what I'm talking about! Shane Jones has transcended this formula (as you can all plainly see if you look around you) by concocting images that convince rather than pretend, that offer illusions based on real life rather than travel brochures. Taking his cue from earlier centuries, he has redeployed this tradition by embracing contemporary objects and ideas within a level of painted trickery that is truly awe-inspiring. He has the power to deceive our perceptions, no question - but how does he actually do it?

Trompe l'oeil, despite its most obvious alchemy - the transformation of sticky, coloured paste into skilful renderings of objects - deceives us more subtly with facsimiles of space. We believe that we are looking into a depth of field while our every other sense reminds us that we're not. But we'll believe what we want to believe, thanks very much. The light tells us that this surface isn't flat. The light . . . and the shadow. No matter how accurate the drawing, and the mathematical analysis of perspective, it is the rendering of light and shade - the equilibrium that most fundamentally informs our vision (and our memories of vision) - that takes these paintings to a higher level. We believe that there is air in these artificial spaces - we believe that they might look different in an hour's time. These effects can only be achieved by a master of deception. Like the guitarist who gives his or her instrument a god-like voice, Shane Jones is a shaman. If a shaman is a teacher, then Shane teaches us how to see, how to notice things. We know, by looking at his work, that he is a master of seeing.

I would urge you to look at the shadows in these paintings. I am reminded of Vermeer's extraordinary understanding of what isn't there. Knowing that he lived in a house full of arguing relatives - wife, mother-in-law, brother-in-law, numerous children - and servants, I often imagine Vermeer contemplating the nature of shadows while plates and angry words flew above his head. I am happy to report that there are no flying plates in the Shane Jones household (that I know of!), but his understanding of the nature of shadows is no less acute. Similarly, light falls across objects in these paintings in a spectral range of complementary colours; white drapes offer shadows of yellow and violet - a crumpled envelope becomes a symphony of pale and mottled colour - masks, gloves and combs are animated by reflected light.

Likewise, most of these paintings offer compositional movement within a rectangle - grids, red zig-zags, and, once again, shadows provide tantalizing pathways for the eye, while subtle interplays of curves and angles keep us roaming within the field. There can be little doubt that here is a painter who knows exactly what he's doing.

But Shane Jones isn't one to be content with achieving highly competent pictures, he wants to push it further. There's more going on here than mere technical bravado - there's a smorgasbord of witty paradox; paintings of etchings, paintings of words, paintings of stretchers, paintings of screens, paintings of blackboards. There are clues and references - books and album covers, objects, photographs - all emblems, perhaps, of influence and homage. A post-modern treasure hunt, no less. I find it very telling that Shane includes painted postcards of the Goldfinch, by Carel Fabritius, and Whistler's Battersea Bridge - two of the most atmospheric painters from art history, artists who found the sublime in the everyday and who were happy to suggest rather than dictate.

There is a lyricism in Shane's work that is usually not found in trompe l'oeil. In short, he has managed to make this form his own. I therefore have great pleasure in opening this exhibition - Illusions - by the man behind the bubble-wrap, aka Shaman Jones, aka Shane Jones.