Shane Jones: Figments of his imagination

by Inga Walton: Article published in "Trouble" May 2012 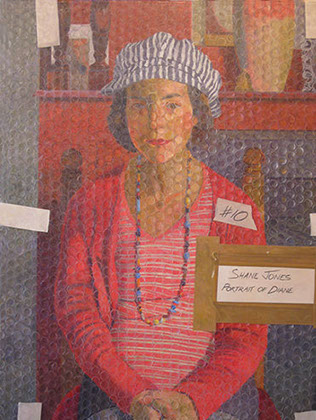 Shane Jones is an illusionist, a conjurer of paint and perceptions. It is not a description he is overly satisfied with, however. “It might seem that a painted illusion demands a lot of skill, but that is not necessarily so. A good way to clarify this is to compare a magician to an artist. A magician’s sleight of hand can weave magical deceptions, but they can also be revealed as tricks. The magic of trompe l’oeil is not the same thing because the thoughts and feelings that make art cannot be explained in a similar way”.

Trompe l’oeil (deceive the eye) is a term that has its origin in the Baroque period. As a style, which employs a heightened realism to suggest that depicted objects appear in three dimensions, examples can be traced back to Greek and Roman antiquity, where it was often used in decorative murals. “Trompe l’oeil paintings may represent the world we think we know, but it’s not all about what the eye sees. What has been concealed by a cloth, what is behind a door, what was once on a display board are images that can only exist in the viewer’s imagination”, Jones believes. An accomplished painter, print-maker and sculptor, Jones was dismissive of the genre for many years. “For most of my life I didn’t think much of trompe l’oeil painting, regarding it more as restaurant decoration, until one day my partner, [artist] Deborah Klein, gave me a book with amazing trompe l’oeil paintings. It was as if scales fell from my eyes and I was shown what could be done in that genre”, he admits. “It’s probably the first time in many years that I’ve referenced other artists’ ideas so closely”.

This exacting style complements a number of other aesthetic preoccupations which resonate within Jones’ oeuvre, such as still life, conceptual portraiture and the figurative. He prefers to focus on the interpretive, or expressive, weight of individual components within the frame. There is little distraction’ or clutter present, as Jones seems to have long preferred a meditative starkness, or perhaps a faithful rendering of absence.

“I think that sums it up perfectly. For me, the meditative means entering a world of thought and stillness, especially stillness. I’ve never been interested in telling stories, but rather, engaging with the unknown, or the air, eternity, or mystery and uncertainty, or whatever you like to call it”, he explains. “I’ve always liked [Baruch] Spinoza’s idea of reality where he says that the body and soul are the same thing expressed in two different ways. It means reality is dualistic, which is why absence attracts me. It is the other part of the physical. Although some of my trompe l’oeil paintings are‘ busier’ than a lot of the work I did before this, they do have a reflective quality about them. But I think this happens when the viewer realises what they are looking at is not what they first thought it was. Where there is illusion there is doubt, and where there is doubt, there is reflection. A lot of my work asks questions, rather than relays a message”.

For Jones, trompe l’oeil is something which resonates with deeper philosophical questions about our collective nature: self-presentation, concealment, and the strategies we employ to control or obscure certain aspects of ourselves. It gives clues as to how we as individuals might perceive and seek to navigate various social and cultural mores. “If a person is deceived by a trompe l’oeil image, it means the viewer has misread what is in front of their eyes. When we observe the upheaval of contemporary events, question our relationship with the environment, or reflect how much society has changed in a generation, it must cast doubt on how we look at the world”, he contends. “We’ve all heard Darwin’s theories regarding physical evolution, but we are not just evolving genetically. There has been little discussion about the spiritual evolution of human beings. I’m referring to those perennial questions: Who am I? Where do I come from? Where am I going? When reflecting on these issues, one would soon begin to doubt one’s ability to answer them. I think that in the past people had beliefs that sustained them, whether they be based in religion or superstition. But science has dispelled many superstitions and has shaken many religious beliefs, yet nothing has taken its place. The mystery, this condition, still remains. Trompe l’oeil realism may connect art with these personal and social conditions when it portrays something that is not what it appears to be.

The myriad distractions, relentless media bombardment, and endless technological intrusions into our daily lives are present in Jones’ interpretations of everyday objects: plasma TVs,computer screens, CD cases and DVD boxes. Jones questions our inability to ‘see’ things in an environment where seemingly everything is mediated by technology; uploaded, downloaded,filtered through websites, and contained within the narrow parameters of screens and devices. Is the ability to discern the difference between the ‘real’ and the ‘fake’ being trained out of us by circumstance? “I feel we have gained much information without experiencing what we have been informed about. Much of what we know about most things comes from some form of media rather than direct experience. This is the idea behind the computer and TV screens, but it’s the illusion that’s the most important thing”,he stresses. “I think true perception is seeing that which is not physical, as well as that which is. I remember reading the letters of [Sir] Hans Heysen [1877-1968], where he referred to ‘seeing what is behind the eye’. That’s a great point, as it highlights the difference between observation and perception. We live in a world where it’s all eyes and no mind”.

Jones’ forthcoming exhibition, Figments, will run concurrently as part of his second residency at The Art Vault, Mildura. “For me, working in a different environment is part of what it means to be an artist. There is more to the art world than the main urban centres, but you can’t know this until you experience the value of regional areas. It’s also good to get out of Melbourne from time to time. Ideas have to come from somewhere, and a change can allow this to happen ... it freshens the mind. An unfettered block of time can also be a blessing because a total focus on the work is rarely achieved at home, where there are many more obligations than making artwork”.

The opportunity also allows Jones to indulge an increasingly important aspect of his practice,“At this stage of my working life I’m feeling drawn to painting and subject matter en pleinair. There is nothing more pleasurable than painting the sunlight and air of the outdoors and Mildura is a place for that to happen. Some of the surrounding areas have appeared in my trompe l’oeil TV sets, like the Murray River and Perry Sand hills, which are amazing sites to engage with. I’ve always loved painting from life. It’s strange that many of the artists I admire are landscape artists, the earliest and perhaps the most important artistic influence has been John Constable [1776-1837], even though I’ve done relatively little landscape painting myself ”.

Although Jones is committed to precision in the subject matter he depicts, photo-realism holds little interest for him, being a poor substitute for the ‘sense of the natural’ he can draw forth from the viscosity of paint.“Although I’m interested in visual detail, this is not the same thing as recreating reality. Many people think realism in art is

best achieved by photography. But machine-made images do not have air; they cannot breathe. A photograph has perspective, but this is not the same thing as air. To make something real, the image needs to have its own inner space or share the same outer space we inhabit. Trompe l’oeil images must do this in order to succeed as illusions. For me, photography is more like a haunting. It preserves a memory of something, rather than conjuring a physical presence, which is what I am interested in”.

Jones believes that artwork predicated on a visual conceit, essentially the art of deception,still has the capacity to convey greater truths if the audience is prepared to consider those possibilities. “Perhaps in the past trompe l’oeil art was used to entertain, much like virtual reality and filmic special effects do for us today. I see contemporary trompe l’oeil still life not as entertainment, but as a means of connecting with uncertainty and inner doubt. I was going to say that the still life illusions are metaphors for the human condition. But I think they are predominantly about directly affecting the viewer’s perception of the real, which is different from the indirectness of a metaphor or symbol”.

While we may enjoy Jones’ skill at executing such amusing and atmospheric charades, he manipulates us in other more subtle ways;picking at our casual assumptions as if they were a canker on reality, and disrupting our quiet adherence to prescribed ways of thinking. Within these works Jones deftly entwines narrative suggestion, the psychological impact of portent,and our compulsion to pursue those things that are somehow withheld or conditional. “Mystics say the world isn’t real, that it’s all an illusion. But when a person mistakes an artwork for the actual thing, it must be because illusions are real or that at least they have a connection to reality,which is why there is confusion in the first place. When we look at an illusion, we are confronting ourselves and the world around us.”