At first glance I sighed with disappointment. Visiting Shane Jones’ studio I had hoped to see some of the completed works before they shipped off to the gallery. However, covered in bubble- wrap, I resigned myself to having to ask questions about the works rather than actually seeing them. While I waited for Shane to return I moved closer to the Portrait of Diane hoping to peer through the outer skin to investigate the painting underneath; one often falls for the folly of thinking one has Superman-like x-ray vision. Of course the painting, like many others in the series, was not covered in bubble-wrap. It was quite simply exquisitely painted in the manner of the long artistic tradition, trompe l’oeil. I stood back again and admired the numerous paintings seemingly enveloped in bubble-wrap, stereotypical landscapes appearing on faux television screens and a door from Jones’ studio which I know will never open. 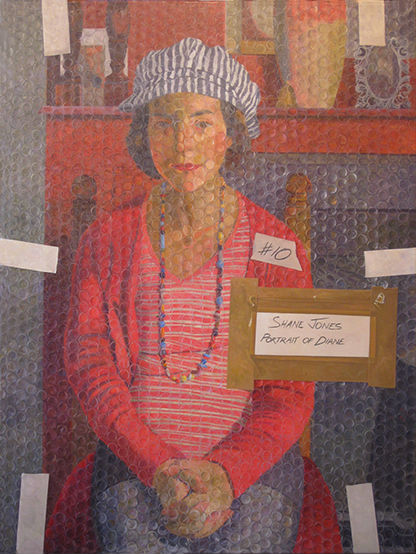 Shane Jones is one of this country’s foremost trompe l’oeil artists: it has been his modus operandi for many years. He has the ability to transform a humble canvas into a door or a corkboard, a piece of board into a CD or a DVD, the two-dimensional into the three dimensional. He has the alchemistic hand to change paint into dust, plastic and cloth. He is able to convert the opaque into a dance of light. However, his skill goes beyond merely being able to trick the viewer into believing they are looking at the “real thing”. Rather his use of this long standing painting tradition is the catalyst for deeper investigation: Jones’ real concern is with the notion that as individuals we know very little about ourselves, let alone others.

As human beings we cloak ourselves in metaphoric bubble-wrap. We may have a small scrap of masking tape attached to us advising who we are but it does little to reveal the full story. Jones’ investigation into this psychological question, however, goes beyond the mere didactic. The numerous television screens in the exhibition capture the Australian inland in all its plasma and LCD glory. For many of us, this landscape, which has become part of the national psyche and narrative, is quite often only known via this digitally mediated experience. Standing in front of these painted televisions, which continue to look like real televisions, Jones challenges us to go beyond the purely aesthetic and to ask Do I really know this landscape ? Do I really know Myself ?

For all his trickery and magicianship, which both delights and frustrates, Jones is generous and humane at heart. He may ask us to look inwards, to ask ourselves  the somewhat difficult question who are we really, but he reminds us of the simplicity of the task. A painting of the austere reverse of a picture frame, the central body of the canvas cut away and its hanging wire frayed and fallen, may not seem that interesting. However, it is in the reverse, this hidden and often never seen part, which reminds us of the human element: finger prints, hand cut edges, personal inscriptions reveal the person beyond the object. Moreover, the missing piece of canvas, this dynamic void, encourages us to explore: to find the missing part of the work, to begin to find ourselves. To do so will be the first step in answering the question Do I really know …