Cabinet of curiosities reveals the flatness of destiny:

The Charles Nodrum Gallery this month resembles a giant cabinet of curiosities. Downstairs , there are mighty graven images, as if extracted from an ancient dynastic tomb and now encased in a miniature museum; and upstairs there are exquisite paintings imitating objects of daily life so closely that you initially believe that you are looking at the real thing. 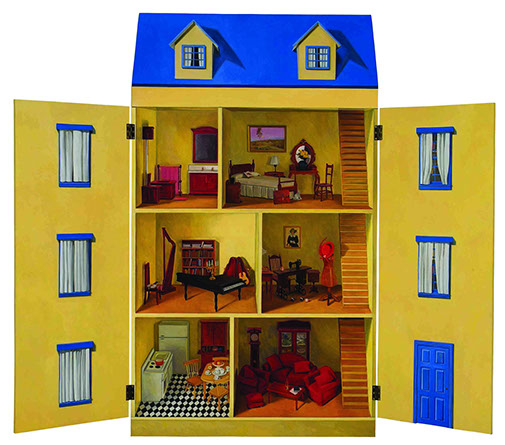 In the middle of the room, there’s a “Doll’s house”. It’s actually a triptych, a painted canvas with two wings; but it looks for all the world like a real doll’s house, with six rooms connected by stairs, all furnished thematically: a bedroom, a music parlour, a kitchen and a lounge room with lots of jumbled cushions. These rooms have been painted assiduously; but the final knack was to have tilted the perspective progressively, so that the lower rooms are seen as if from higher above than the upper rooms.

This presupposes that the viewer is one metre away at an adult standing height when the doll’s house is raised on a plinth. It’s the same perspective as a child would obtain when viewing the house on the floor. And because the wings are genuinely hinged and there’s a 3D aspect to the work, the painted illusion assumes an uncanny credibility.

The great wit behind Jones’s trompe l’oeil technique is not that his pictures painstakingly copy every detail; rather it’s that the artist identifies motifs whose form is close to that of a painting, so they lend themselves to the optical trick. The painted plank resembles a real plank because of replicating its format, not just its surface.

This is also evident with the noticeboards and corkboards. The shape of such objects is essentially flat, just like a painting; and so the illusion is easy to achieve, as the motif (board) structurally resembles the thing that imitates it (painting). In addition to reproducing the flat surface, Jones has only to paint a bit of chalk and ledge with a smidge of shadow, and a couple of pins with a touch of reflective light, and behold, the thing pops out as a blackboard or noticeboard.

Because of this bizarre parallel between the flat and the flat, the pictures are wickedly deconstructive. They tell you that painting is aligned perilously with a prosaic mode of display and in some sense conforms to the ordinary flat things – such as corkboard – that Jones makes it replicate.